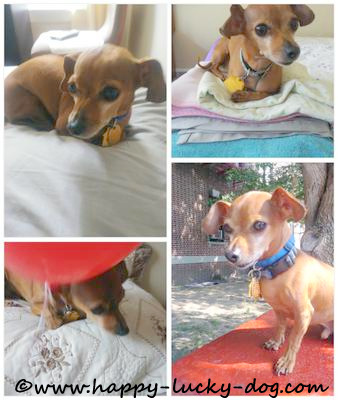 This is my dog Rooney. He is a male chihuahua... at least that's what I think. Everyone calls him a furry sausage though, and one girl kept arguing with me since she thought Rooney was a dachshund.

Anyway, he is a 7 year old male chihuahua. My dad got him from a friend or something. At first, he was ridiculously skinny and terrified. He bit me a few times and he especially "hated" my mom.

A few weeks and months later however, he became less terrified and started to become more of himself. He started gaining weight and he became cuter and cuter everyday. He became healthier and nicer too. He especially loves my mom now! He was too cute and nice that his previous owner begged my dad to give him back. He even offered to pay my dad TWICE the price my dad paid for the dog. But, of course, he said NO.

Two years later and my Rooney is happier than ever. He loves me almost as much as I love him. Everytime we walk him, everyone's like "Aww hes so cute !!!!!!" and "Aww can I pet her?" (a lot of people think he is a girl for some reason...) and "OMG that is such a cute sausage!". EVERY DAY, my dog is loved. Except for that one time some guy called him a ba*$#@rd. What can I say...

My friends really like Rooney and one even offered 20 bucks for him (I said no, duh.) I have so many pictures of him that it's so diffcult to choose... Well, I chose the best of the best just for you guys.


Well, I hope my story was enjoyable, even its its just an entire essay, made by some random person on the internet, bragging about how cute and amazing her sausagy dog is!
Thanks for reading my story!